With Eleven2 being a Premium VPS provider we get this question a lot. Why do you charge $49/mo when I have seen VPS Servers available for a few dollars? To answer that question, lets take a further look into the details.

After doing a Google search for ‘Cheap VPS’, I averaged out the plans of the top listed providers… 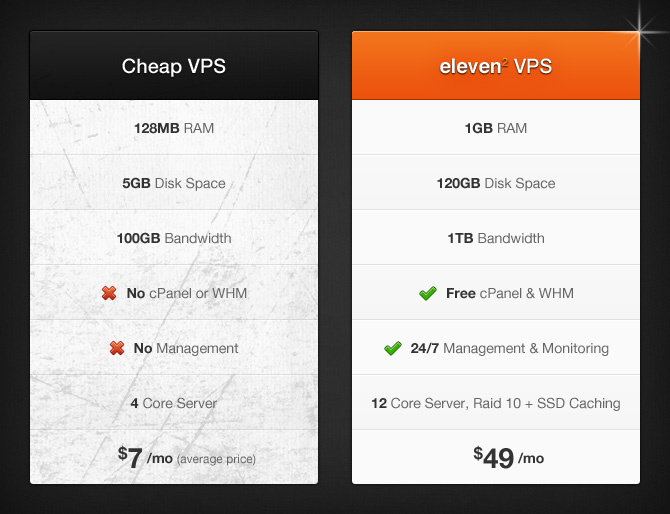 Now lets look into the numbers. The cheap VPS includes 128 MB Ram. What will 128 MB run? The answer is basically nothing at all. You would be VPS ninja if you could get a website to run on that. There is also no control panel, so you will need to install Apache, MySQL, FTP, exim and everything else needed to run a normal website. The Eleven2 VPS includes cPanel and WHM control panels, and is ready to run even a busy site with 10 times the RAM of the cheap VPS.

Next let’s move on to disk space. The cheap VPS includes 5 GB disk space on a single hard drive. That’s as risky as crossing the road with your eyes closed, and having ear muffs on! Hard drives fail constantly on servers since they run 24/7, with no break!

The Eleven2 VPS includes 120 GB of disk space on RAID 10. What is Raid 10? In our case it is 8 hard drives working together as one. We can lose multiple hard drives, and still remain online with no data loss! We change out hard drives across our entire infrastructure everyday without clients ever knowing! No seriously, we go through them like candy…

On the cheap VPS you are looking at 24-48 hours of downtime, if a hard drive completely fails.

Another question: Does the cheap VPS have a backup? Probably not. Our eleven2 VPS platform has multiple backups with multiple restore points. We take backups once every night, week and month. So you have three full restore points.

Moving onto bandwidth. The cheap VPS provider includes 100 GB, which isn’t terrible. That will run a normal website. The Eleven2 VPS however includes 1 TB, which is 10 times the bandwidth and enough for nearly all websites!

We also need to consider these major price factors:

Now To The Math:

The cheap VPS has 1/10 the resources, so let’s times the price by 10 to reach the same limits as the Eleven2 VPS.

Next let’s add in cPanel and VPS Management:

$114 – Holy smokes that’s not cheap at all! That doesn’t even include the high end server, SSD caching and multiple backups that you get with an Eleven2 VPS. So to sum things up, you are not getting a cheap VPS, you are getting fooled by marketing. If you want a reliable VPS with one of the cheap VPS companies, it will cost even more than the premium VPS you can get from Eleven2. Most of the cheap providers lure you in with the cheap price, and when it keeps crashing they have you upgrade to a VPS that is far more expensive.